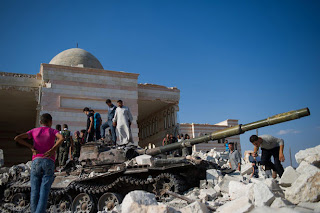 By Tom Perry
BEIRUT, Aug 19 (Reuters) - Syrian President Bashar al-Assad made his first appearance in public since a July bombing that killed four top security officials, attending prayers at a Damascus mosque on Sunday to mark the start of the Muslim holiday of Eid, state TV showed.

The first day of Eid also gave Assad's opponents a chance to rally and activists reported protests around , including in the capital, on a holiday that marked the end of the Islamic holy fasting month of Ramadan. Fighting raged on around , killing more than 100 people, an activist group reported.

Battling a 17-month-old uprising against 42 years of rule by his family, Assad was filmed at prayer with his prime minister and foreign minister but not with his vice president, Farouq al-Shara, whose reported defection was denied the previous day.

Shaken by a July 18 bomb attack in and defections - including that of his last prime minister - Assad's recent appearances on state TV had previously been restricted to footage of him conducting official business. He was shown swearing in the new prime minister a week ago.

's civil war has intensified since the bombing that killed members of Assad's inner circle, including his defence minister and brother-in-law.

Assad was pictured sitting cross-legged at a mosque in the Damascus residential district of Muhajirin listening to a sermon in which Syria was described as a victim of "terrorism" and a conspiracy hatched by the United States, Israel, the West and Arabs - a reference to Gulf states which back the revolt.

Sheikh Mohammad Kheir Ghantous said the plot would not "defeat our Islam, our ideology and our determination".

Dressed in a suit and tie, Assad smiled as he greeted officials including senior members of his Baath Party.

In attendance were Foreign Minister Walid al-Moualem and Prime Minister Wael al-Halki. He is the replacement for Riyad Hijab, a Sunni who has joined the opposition to Assad since his defection was announced on Aug. 6.

Hijab was the highest-level Syrian official to desert the government so far. Reports on Saturday that Shara, also a Sunni, had tried to bolt to drew a denial from the government.

Shara, 73, had "never thought for a moment about leaving the country", according to a statement from his office broadcast on state television. Shara, whose cousin - an intelligence officer - announced his own defection on Thursday, comes from Deraa province where the revolt against Assad begun.

The ex-foreign minister kept a low profile as the revolt mushroomed but appeared last month at a funeral for three of the slain officials. The fourth died later of his wounds.
With diplomatic efforts to end the war hampered by divisions between world powers and regional rivalries, Syria is facing the prospect of a prolonged conflict that threatens to destabilise the Middle East with its sectarian overtones, pitting a mainly Sunni Muslim opposition against the Alawite minority to which Assad belongs.

The statement by Shara's office said he had worked since the start of the uprising to find a peaceful, political solution and welcomed the appointment of Algerian diplomat Lakhdar Brahimi as a new international mediator for .

Brahimi hesitated for days before accepting the job. 's U.N. envoy Gerard Araud has called it an "impossible mission". Brahimi replaces former U.N. Secretary-General Kofi Annan, who is leaving at the end of the month.

Annan's six-point plan to stop the violence and advance towards negotiations was based on an April ceasefire agreement which never took root. The conflict has deepened since then.

FIGHTING CONTINUES DESPITE START OF EID

The London-based Syrian Observatory for Human Rights said more than 100 people had been killed on Sunday. The figure could not be independently verified. It reported fighting in , Deraa and elsewhere despite the start of the Eid holiday.

In the rebel-held , near the Turkish border, the bereaved visited their relatives' graves, in accordance with Eid tradition. "He had four children, he was my only son," said an elderly woman who identified herself as Umm Jumaa, speaking in a video obtained by Reuters as she visited the grave of her slain son.

A trench had been dug nearby in anticipation of more bodies.

Even as President Assad appeared in , videos posted by activists on YouTube showed protests against him in and around the capital. "Oh martyr, your blood will not go to waste," chanted protesters in Qudsia, a neighbourhood, in a YouTube posting dated Aug. 19.

"The people want divine protection," chanted several dozen men shown in another video, posted by activists and dated Aug. 19. It showed a protest at Yabrud, north of .
But what started out last year as a mostly peaceful protest movement against Assad's rule is now an armed insurrection.

Government forces have increasingly resorted to air power to hold back lightly armed insurgents in and 's largest city and business hub. More than 18,000 people have died in 's bloodshed and about 170,000 have fled the country, according to the United Nations.  has been the theatre for some of the heaviest recent fighting. Rebels hold several districts in the country's largest city and have tried to push back against an army counter-offensive.

U.N. investigators said last week that government forces and allied militia had committed war crimes, including murder and the torture of civilians in what seemed to be state-directed policy.

Syrian insurgents had also committed war crimes, including executions, but on a smaller scale than those by the army and security forces, according to the investigators.
Syrian state television reported that government forces had thwarted several attempts by armed groups to infiltrate from , a country whose own fragile stability has been put under strain by the conflict next door.

Brahimi will have a new title, Joint Special Representative for . Diplomats said this was to distance him from Annan, who complained that his peace plan was crippled by splits between Western powers - who want Assad out - and - his weightiest ally - and in the U.N. Security Council.

Describing the situation in as "absolutely terrible", Brahimi told Reuters he urgently needed to clarify what support the United Nations can give him.

But he drew criticism on Sunday from the Syrian opposition over a statement that it was too early to say whether Assad should step down - in apparent contrast to Annan who said it was clear the Syrian leader "must leave office".

In remarks to Al Jazeera on Sunday, Brahimi backed away from the comment, explaining that it was too early for him to say anything at all about his mission. "I was only appointed two days ago," he said.

Posted by William Kelly at 7:47 PM No comments: 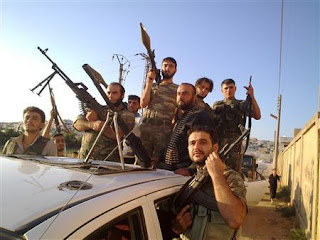 (Reuters) - Veteran fighters of last year's civil war in have come to the front-line in Syria, helping to train and organize rebels under conditions far more dire than those in the battle against Muammar Gaddafi, a Libyan-Irish fighter has told Reuters.

Hussam Najjar hails from , has a Libyan father and Irish mother and goes by the name of Sam. A trained sniper, he was part of the rebel unit that stormed Gaddafi's compound in a year ago, led by Mahdi al-Harati, a powerful militia chief from 's western mountains.

Harati now leads a unit in , made up mainly of Syrians but also including some foreign fighters, including 20 senior members of his own Libyan rebel unit. He asked Najjar to join him from a few months ago, Najjar said.

Najjar said he was surprised to find how poorly armed and disorganized the Syrian rebels were, describing Syria's Sunni Muslim majority as far more repressed and downtrodden under Assad than Libyans were under Gaddafi.

"I was shocked. There is nothing you are told that can prepare you for what you see. The state of the Sunni Muslims there - their state of mind, their fate - all of those things have been slowly corroded over time by the regime."

"I nearly cried for them when I saw the weapons. The guns are absolutely useless. We are being sold leftovers from the Iraqi war, leftovers from this and that," he said. "Luckily these are things that we can do for them: we know how to fix weapons, how to maintain them, find problems and fix them."

In the months since he arrived, the rebel arsenal had become "five times more powerful", he said. Fighters had obtained large caliber anti-aircraft guns and sniper rifles.

Disorganization is a serious problem. Unlike the Libyan fighters, who enjoyed the protection of a NATO-imposed no-fly zone and were able to set up full-scale training camps, the rebels in are never out of reach of Assad's air power.

"In , with the no-fly zone, we were able to build up say 1,400 to 1,500 men in one place and have platoons and brigades. Here we have men scattered here, there and everywhere."

Although many rebel units fight under the banner of the Free Syrian Army, their commands are localized and poorly coordinated, Najjar said.

"One of the biggest factors delaying the revolution is the lack of unity among the rebels," he said. "Unfortunately, it is only when their back is up against the wall that they start to realize they should (unite)."

's uprising has evolved into an all-out civil war with sectarian overtones, pitting the mainly Sunni rebels against security forces dominated by Assad's minority Alawite sect, an offshoot of Shi'ite Islam. Assad is backed by Shi'ite-led Iran and opposed by most Arab states, which are ruled by Sunnis.

"This is not just about the fall of Assad. This is about the Sunni Muslims of Syria taking back their country and pushing out the minority that have been oppressing them for generations now," Najjar said.

The presence of foreign fighters is a sensitive issue for 's rebels. Assad's government has taken to referring to the rebels as "Gulf-Turkish forces", accusing the states and Turkey of arming, funding and leading them.

Harati's unit is known as the Umma Brigade, referring to the global community of Muslims. Najjar said thousands more Sunni fighters from the Arab world were gathering in neighboring countries prepared to join the cause.

Harati is reluctant to enlist them because he does not want his cause tarnished by the perception that foreign Islamists are linked to al Qaeda, Najjar said, but he said that many of the foreigners were making their way to on their own.

The Umma Brigade's Facebook page shows a picture of Najjar aiming his rifle in what looks like an open field. In another he is posing with Harati and rebels. A YouTube video shows Harati leading an attack on a checkpoint in Maarat al-Numan in .

Najjar said militancy would spread across the region as long as the West does not do more to hasten the downfall of Assad.

"The Western governments are bringing this upon themselves. The longer they leave this door open for this torture and this massacre to carry on, the more young men will drop what they have in this life and search for the afterlife," Najjar said.

"If the West and other countries do not move fast it will no longer be just guys like me - normal everyday guys that might do anything from have a cigarette to go out on the town - it will be the real extreme guys who will take it to another level."

William Kelly
I am a freelance writer, journalist and historian whose major interests are music and history, with a special emphasis on the assassination of President Kennedy.