Syria - Assad Next to Fall 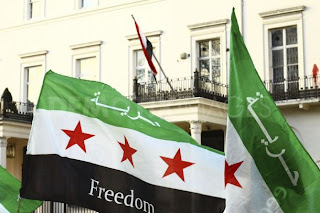 Posted by William Kelly at 9:05 PM No comments:

JFK: Strategy of Peace in the Middle East 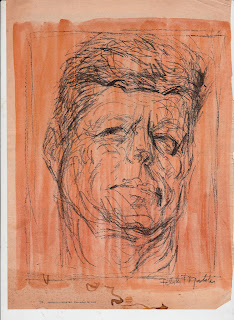 The today is a monument to Western misunderstanding. During the last eight years the West has ignominiously presided over the liquidation of its power in the whole region, while the U.S.S.R. has gained important footholds. American policy has wavered and wobbled as much, if not more, than any other Western country…

But the main problem was and is understanding the driving forces and central needs of the region as a whole and devising an appropriate farsighted American policy….

Our mistakes in the , it seems to me, were primarily mistakes of attitude. We tended to deal with this area almost exclusively in the context of the East-West struggle – in terms of our own battle against international Communism. Their own issues of nationalism, of economic development, and local political hostilities were dismissed by our policy-makers as being of secondary importance.

This is not to say that we were necessarily wrong in saying that Communism was their greatest enemy – but we were wrong in believing that we could convince them that it was. We were wrong in believing that what was so clear to us could be made equally compelling to other peoples with problems very different from our own – people with a much lower standard of living, a much greater pride in neutrality and a much more cent history of foreign exploitation. The Arabs knew that their lands had never been occupied by Soviet troops – but they had been occupied by Western troops – and they were not ready to submerge either their nationalism or their neutrality in an alliance with the Western nations.

We made other grave errors in the . We overestimated our own strength and underestimated the force of nationalism. We failed to perceive when we had lost control of events – and failed to act accordingly once it became clear. We gave our support to regimes instead of to people – and too often we tied our future to the fortunes of unpopular and ultimately overthrown governments and rulers.

We believed that those governments which were friendly to us and hostile to Communists were therefore good governments – and we believed that we could make unpopular policies acceptable through our own propaganda programs. Without question some of these governments were good governments – genuinely devoted to the welfare of their people and the development of their economies – but logic and fact are not the same as what people believe. The mutilated body of Iraqi Premier Nuri As-said, to cite one vivid example, hanging from a Bagjhdad lamp post a year ago last July, became the symbol of what happened to our policy in Iraq.

Is it not ironic that today – after considerable expenditure, turmoil, Communist gains and Western defeats – we are striving to achieve for the Middle East the very status of neutrality on which we turned our backs some three years ago?

The mistaken attitudes of the past – our previous misconceptions and psychological barriers – must all be junked – for the sake of the Arabs and for our own sake as well. Where our approach was once trite and traditional, it must now be imaginative, progressive, and practical. Above all, it must recognize things as they are and not just as we would have them to be for our convenience. We must talk in terms that go beyond the vocabulary of Cold War – terms that translate themselves into tangible values and self-interest for the Arabs as well as ourselves.

But if we can learn from the lessons of the past – if we can refrain from pressing our case so hard that the Arabs feel their neutrality and nationalism are threatened – if we can talk with them in terms of their problems, not ours – then I am convinced that the can become an area of strength and hope. Let us make clear that we will never turn our back on our steadfast friends in , whose adherence to the democratic way must be admired by all friends of freedom. But let us also make clear throughout the that we want friendship, not satellites – and we are interested in their prosperity as well as ours. To do this job, to do it right, requires the combination of imagination and restraint which we have thus far not demonstrated in the . But the time to do so is now.

While we, along with the leaders of our nation and the world, are concerned tonight with the daily developments in the , I think my comments should be directed toward a longer-range view of the situation. It would be worth while for all of us now while negotiations proceed to examine the problems that will still be present once hostilities have ceased, borders have been redrawn, and alliances rebuilt.

Much in the Middle East, of course, is the same as it was a generation ago; much will remain the same: the special importance of the Middle East to the great religions of the world, Jewish, Moslem and Christian; the economic interests of Britain and France in the area, present today as they were a generation ago; the traditional rivalries between the various Arab blocs, between the Saudis and the Hashimites, beween the Nile and the Euphraties-Tigris valleys, between northern Arabs and Southern Arabs, rich states and poor.

But let us consider the new trends and developments which have altered the character and significance of the and its problems, and with which we will be reckoning long after the present crisis has ended. There are, it seems to me, seven such facts.

The future of the will be based upon the interrelation of these seven factors. We now realize that there is no problem in the in which the security of the is not involved and to the solution of which we don not have some responsibility. But we shall fulfill those responsibilities with lasting benefits for ourselves and the world only if we develop a Middle Eastern policy of our own; and only if we base that policy upon a long-range point of view – upon the interlocking and interaction of the above facts and factors.

Posted by William Kelly at 4:58 PM No comments:

William Kelly
I am a freelance writer, journalist and historian whose major interests are music and history, with a special emphasis on the assassination of President Kennedy.